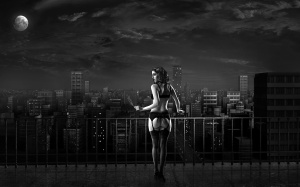 She arrived home after a long day at the office and unwound by taking a much-needed Jacuzzi bath and a glass of chilled Merlot.

She got dressed, donning a black silk button up blouse, a beige miniskirt, thigh high stockings and black knee-high 5” heeled boots. A black leather jacket completed the outfit. She was on her way to meet her man at the local jazz spot for an evening out.

She stepped out into the chilly night air, smoke coming from her glossed lips. As she was about to step into her vehicle, her ex-man pulled up alongside her X5. As always, he wanted to talk about what was and what could be. She was really in no mood to deal with this now, but feeling nice from the wine, and having a soft spot in her heart for this misguided fool, she would humor him.

She slid into his vehicle, legs slightly parting, showing beautiful thighs and the promise of what could be. This aroused him. He wanted to talk about things past and getting together, all she wanted to do was get to her man. As a compromise, she agreed to listen to him if he would take her to the jazz spot.

Goapele was playing on the radio, and this music always put her in a mellow mood. She put her head back, closed her eyes and let the smooth sounds take her away.

As she zoned out, he lightly caressed her thigh. Feeling good to her, she parted her thighs even wider. He reached further up her thigh until his fingers brushed her fat pussy. Realizing what was happening, she closed her legs, unintentionally trapping his fingers between her thighs. This gave her a tingle and made her wet, but she wasn’t going down this road again.

As she tried to push his hand away he resisted, they had been here before. He pinched her clit with his fingers making her moan. He started to insert his fingers into her pussy; she grabbed his hand in an attempt to remove them. But it caused him to insert them deeper, she loved a good finger fucking.

She let him get his fingers wet for a few seconds before removing his hand. He never did like being rejected. He drove off and after a few minutes pulled onto a dead end street.
He reached over pulled her blouse open, exposing hard nipples. He leaned down and started sucking her erect nipple. She was trying to push him away, but her panties were getting soaked and she loved the feeling of her nipples being bit. She grabbed his head and pulled him away and in the same motion got out of the car.

His dick was hard, his fingers were wet, her perfume was on his breath and this pussy was once his.

He got out the car and rushed around to her side of the car stopping her from going anywhere. With her leaning against the car he got to his knees and started pulling her panty down, she wouldn’t let him, so he ripped them off, forced her legs open and started licking her pussy. She liked a forceful man and a good pussy suck always made her weak. He stuck his thick tongue deep in that pussy, damn! What was she gonna tell her man.

She leaned back, hating this motherfucker but loving a good dick – down. How was she going to explain to her man why she was late…

*this is another reader submitted amateur erotica story